I know! I haven’t written at all this month, not a great way to start out a new blog! In my defense however, my apartment was broken into (and yes, they took my only item of any monetary value: my computer) and then my sister came to Paris for a visit so I was literally unable to write a new blog post until now. Anyways, after that semi apologetic introduction here’s a little review about one of the places I took my sister to while she was here: Buvette Gastrothèque Paris, one of my current fave restaurants in the city of light.

La Buvette, still in the afternoon, before the dinner crowds arrive.

I usually go here in the evening when there is ALWAYS a line-up to get in and you have to wait for an hour or so to be seated, but as I had taken the week off work we decided to drop by for lunch at around 1 pm. It was a beautifully hot September day and I automatically asked the server if it was possible to eat outside. There were two little metal stools outside so we grabbed those, as well as a small wooden table, and the waiter balanced our water carafe on an empty silver ashtray stand, happy to help us out. Feeling very comfortable, surrounded by baskets of lemons and oranges, we began to look at the menu while enjoying the afternoon sun on our faces. 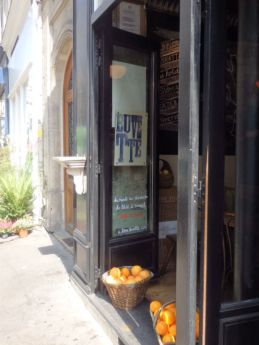 Space for a table for two

I should mention quickly that Buvette Gastrothèque Paris is owned by Jody Williams, an American who first opened Buvette Gastrothèque in New York and then decided to do the same thing in Paris. So if you can’t make it to Paris but are closer to New York, then you should check it out, apparently the dishes are similar to the ones in Paris. Her venture worked out as she now has fashionable Parisians lining up every night to try some of her mouth watering dishes, sip on one of her creative (but pricey) cocktails, or pick a bottle of wine from the extensive wine list.

Back to lunch! So, we each ordered a slightly sparkling lemonade and chose three dishes to share: white asparagus with homemade aioli and an egg mimosa-like mixture (7 Euros), black olive tapenade and a generous helping of ratatouille piled onto chunks of bread (5 Euros), and thinly sliced roast lamb mixed with white beans, a tasty vinaigrette and garnished with several Kalamata olives (10 euros). Everything arrived on a large silver tray and was a feast for the eyes. A light but delicious lunch! I should mention that the dinner menu is larger than the lunch menu and I have previously tried such wonders as the mini hachis parmentier and a grated carrot, cilantro and pistachio salad mixed with a light vinaigrette. Obviously you’ll probably want to order more than we did, but remember that here they favor quality over quantity! All the dishes I have tried are bursting with flavor in every bite. As we weren’t completely full, we ordered a tarte tatin (7 Euros), the caramelized apple upside down tart that was displayed on the long marble counter inside. The apples had that lovely rich caramel taste which was nicely toned down with a scoop of sour cream. Another great culinary experience at Buvette!

Our delicious and light lunch

Afterwards, we wandered through the trendy SoPi (South of Pigalle) neighborhood, and thought how nice it would be if we could do this more often. I’ll have to patiently await my sister’s next visit but luckily I can find this amazing food whenever I want, as Buvette Gastrothèque is open 7 days a week from 8:30 am until midnight!

5 little plates of deliciousness out of 5!