Words are hard to come by after the horrible terrorist attacks that occurred in Paris last night, however, I felt that a short reflection was needed. It really hit me hard this time as they attacked more than this city and its people; they attacked life and the pursuit of happiness itself.

It was almost one year ago today, November 16th, 2014, that I was at a concert at the Bataclan. I remember how incredibly excited I was to see my favorite hip hop artist, Common, live for the first time ever. I remember entering the beautiful theatre and the sense of unity shared by everyone as we all smiled and sang the same lyrics together in unison. I was so close to the stage that I could almost reach out and touch him! What a thrill! We were all at that concert to enjoy his music and to dance and feel alive. I was on a cloud of happiness after that concert, filled with the feeling that the world was an amazing place. Last night the people at the rock concert probably had the same feelings of anticipation and excitement. They probably screamed and cheered when the concert began and felt the incredible rush that music can sometimes bring. Like myself, they were there to have fun and forget their troubles…but unfortunately their evening transformed into horror.

I have been several times to Le Petit Cambodge, the restaurant near Canal Saint Martin that makes super yummy noodle dishes (they are especially known for their “bobuns”) and that was sprayed with bullets last night. I have fond memories of sitting outside in their colorful chairs with friends one summer night and equally another time inside, with a friend, where it was super crowded and we were elbow to elbow with the people beside us (but we didn’t mind one bit). This place is well known in Paris and is very popular, and as the temperature has been fairly mild lately in Paris, I’m sure it was packed with hungry diners.

Basically, the thing that shook me up the most was the fact that it could have been me, or my friends, that were attacked by these monsters and I realize just how lucky I was have had a night that did not end in such a traumatic manner.

So as I’ve already said, they attacked more than a city last night. They attacked innocent civilians who only wanted to enjoy their Friday night in whichever way brought them joy. Parisians love their Friday nights (and Saturdays too)! They love to go out for drinks, enjoy a good meal with good company, dance at a concert and live in the moment! These terrorists attacked the right to sit out on a terrasse and enjoy a cheese plate with a glass of wine, or simply a round of beer with friends. They attacked the right to dance like no one is watching or to sing to a song that you have sung along to for years and that has perhaps got you through some tough times. They basically said that everything Paris stands for should die. But it won’t.

Today, while going to get my groceries I overheard a Muslim mother talking to her son of about 4 years old in the street. She said “There are Muslims, Christians, Jews and Buddhists and we should respect everyone and their religion”. The boy looked up, slightly puzzled, and she continued; “we should never treat others badly because they are different, because the world is full of differences, and that is what makes it beautiful.” I looked over at her and smiled, then the traffic light changed and I crossed the street. I couldn’t help thinking that if every child had someone to teach them such compassion and acceptance, then these monsters would not be able to brainwash impressionable young people with their hateful messages and turn them into inhuman killing machines.

I can only hope that Paris will recover from these horrors while keeping its soul and my deepest sympathies go out to all of those who lost a loved one. I also hope that other cities in the world who have equally suffered from similar attacks, but which are not as “famous” as Paris, will receive the world’s support as we have seen over the last 24 hours. My heart breaks for Paris, but it is the city of love, light, freedom, music, art, culture, drinking wine and skipping home in the streets after a great night out and, in my mind, will always be capable of healing and shining bright again.

I’m a big fan of fusion cooking, if it’s done right, so when I heard about Ouh là là-Cantine St. Martin and their French style tacos I was immediately intrigued. I mean I love tacos and I love French food…and I love saying Ouh là là, so it was really a no brainer for me! Located near Strasbourg Saint-Denis métro station in a quiet pedestrian street, this eatery is easy to spot thanks to its bright blue awning and cheery yellow chairs that really add some warmth to an otherwise cold autumn day.

Inside, the welcome was equally sunny with one of the owners quickly finding us a seat and telling us our dining options with a smile. The decor is simple with a stone wall facing a geometric printed wall behind the food counter. It is completed by wooden tables and modern light fixtures that dangle playfully at different lengths around the room. The tacos served here are not at all Mexican, instead the flour tortillas are filled with a choice of homemade cold or hot concoctions, using quality ingredients, that change every week. Their special of 3 tacos for 10 Euros is great for a light dinner, or you have the option of adding a fourth taco for 2,50 Euros. They also offer a side of salad or roasted potatoes (2,50 Euros), if you’re really hungry.

We took a while to decide because to be honest, all of the options sounded delicious. We watched as the other owner sliced a large Aveyron (a region in France) sausage from behind the counter and plunged her spoon into a pot of creamy polenta while preparing the tacos with care. I could tell that she took pride in the food she served.

After a long debate, the 3 tacos I opted for were: 1) pastrami, arugula, pickles and honey mustard sauce; 2) fresh goat cheese marinated in thyme and lemon with some mixed greens; and  3) Aveyron sausage with caramelized shallots. All of them were super tasty and very unique with their flavor combinations. I also had a side of roasted potatoes, seasoned with rosemary, which were really good too. They equally had a nice selection of French wines and other interesting drinks, which is always a good thing. I’ve taken a look at their Facebook page, where they post their weekly menu, and I am pretty impressed with what they have come up with to put in their tacos so far; with some eclectic examples including steak tartare, smoked duck breast with Fourme d’Ambert cheese and seabream ceviche. Oh! And did I mention that they have dessert tacos filled with such yumminess as banana and Nutella? 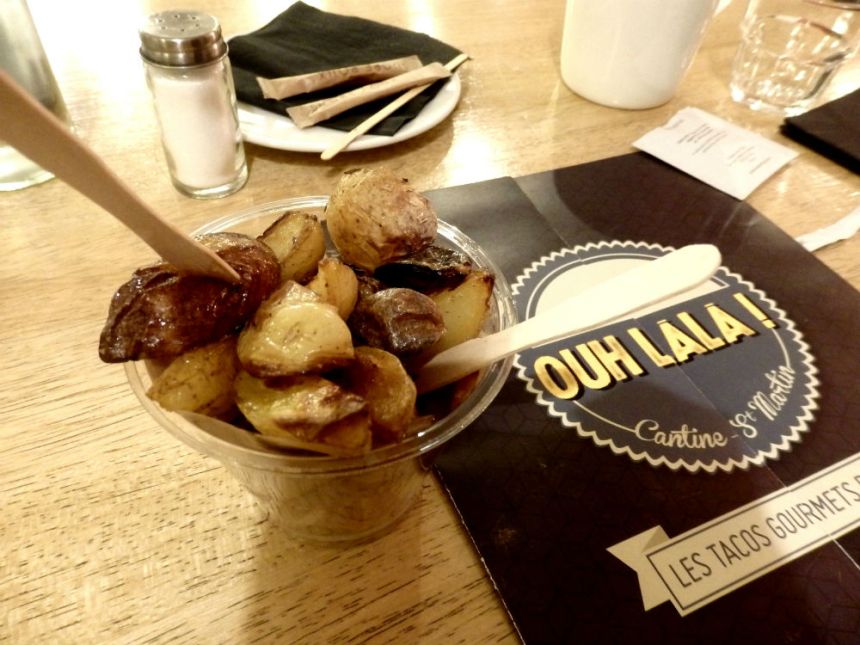 While the restaurant is pretty and stylish, I found the chairs to be a little uncomfortable and I think that next time I would go for a take-out. The seating area is rather small and fills up quickly. You can also order some of their tacos through deliveroo.fr, if you’re not in the mood to go get them yourself (while we were eating, two delivery guys dropped by and picked up orders from the counter). So, what I learned that night was that you can really put anything in a tortilla, because why not! I think I am even going to be inspired to make some of my own at home…maybe with some Canadian ingredients! Of course I am a huge fan of authentic Mexican cooking, but these multicultural creations at Ouh là là-Cantine St. Martin are a great example of what good can come from thinking outside of the box and blending various cuisines from around the world.

4 uniquely filled tortillas out of 5