You’re in Montmartre and looking for a place to eat. If you haven’t done your homework before heading out, it is easy to sit yourself in one of the many busy restaurants along the main streets around Abbesses métro station which, I’m going to be honest, can be pretty disappointing. So to inaugurate my blog (*giggles of excitement*), my first post will be a review of La balançoire:  a great option if you’re looking for a restaurant in the 18th arrondissement (my favorite area of Paris FYI) where the food is freshly made and tasty, the service is super friendly and the atmosphere is cozy and playful.

I had passed by this place on numerous occasions and finally got to check it out with my boyfriend on a Saturday night. Luckily I had made a reservation as, apart from our table for two, the place was otherwise packed. We sat down and immediately I saw it: a wooden swing attached from the ceiling with two long ropes! I mean I guess I shouldn’t have expected anything less from a place called “the swing” (English translation of La balançoire), but I was still surprised. The immature part of me wanted to go over there and try it out, but I decided, or rather forced myself, to resist (although I am totally going to come back with friends next time and reserve that table)! 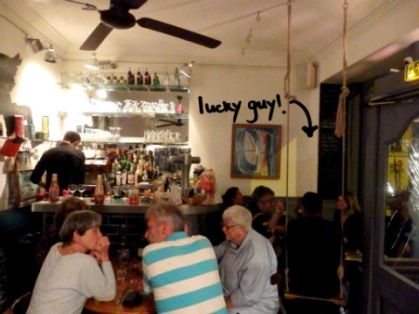 The smiling waiter arrived with the menu written on a big chalkboard and proceeded to explain, in detail, the 6 or 7 entrées and main courses offered. I definitely appreciated this and my usual questions (i.e. what does it come with? what exactly is in the sauce? etc.) were answered. I ordered the house cheeseburger (16 Euros) and added bacon (because if adding bacon is an option, I add it…obviously!) and my boyfriend chose the beef tartare (18 Euros). We then played with the forks and spoons that were floating above our napkins, thanks to a hidden magnet in the table, and admired the charming décor around us that included jars of French candies, cookbooks, rows of wine corks, and vintage telephones. 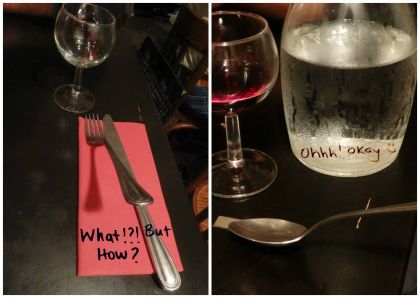 Our dishes arrived along with a nice bottle of Bordeaux (24 Euros, but if you’re on a budget you can also just get a glass for under 5 Euros). My burger came served in an English muffin style bun (which I found original) with tomato, lettuce, a slice of cheese and two strips of crispy bacon, along with a side of super yummy fries and some mixed greens tossed in a light vinaigrette. I tried a taste of the beef tartare, presented nicely with an egg yolk on top, even though I have been scared to try this dish in the past (I’m a little paranoid when it comes to food poisoning)! It was clearly a finely chopped steak rather than the mince beef tartare I usually see, and the taste of Dijon mustard and capers mixed in that little bite I tried was divine. We still had some wine left, so we shared a mousse au chocolat (8 Euros) which was creamy and light and garnished with a few red currants. 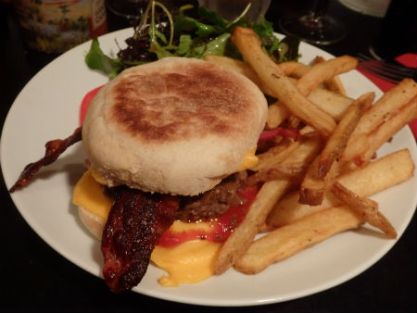 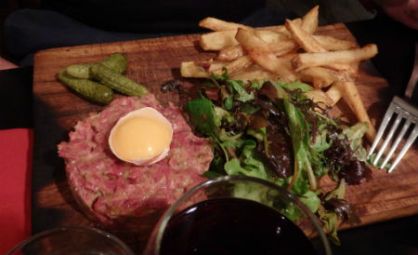 When we finally asked for the bill, surprise, surprise: it arrived with a jar full of candies!!! And not just any candies, fraises Tagada (which, in case you don’t know, are those yummy little pink strawberry flavored and sugar coated marshmellowy treats)! We were too excited and started grabbing them by the handful. We paused at one moment wondering if perhaps we were in fact stuffing our faces with decorative candies that had been sitting in a jar for years, but we were reassured (yes…we asked) that they are in fact for us to enjoy and that they refilled the jars regularly. Awesome!!! I need to mention again, for those of you who don’t believe that polite Parisian waiters exist, that the two male servers were beyond friendly, laughed at our lame jokes (without even a hint of an eye roll) and told us that the owners have now opened a second restaurant, not too far away, called La boite aux lettres (which I will be sure to check out soon).

La balançoire is equally open for lunch, featuring a starter+main course or main course+dessert special for 15 Euros or the 3 courses for 18 Euros. With its constantly changing menu made up of carefully prepared French dishes, I will definitely be back.

My Rating: 5 strawberry marshmallows out of 5!