I know it’s a little (a lot!) late but Happy New Year from Paris! 🙂 With a new year comes new experiences and my first one this year has been trying a bibimbap at a Korean restaurant aptly named Bibimbap! It is located near Saint-Marcel metro station, which is not the greatest of areas when it comes to restaurants, but a friend of mine living in the area recommended it, and I was happy he did. I have been to Korean barbecue many times before in Vancouver, but the bimimbap had somehow escaped my foodie radar until now.

From the outside I have to admit that the restaurant doesn’t look like anything special (and inside is no different with generic jazz music playing overhead) but what they may lack in decor they make up for in their cuisine. We sat down by the entrance at a table with a little doorbell button on it that you can push to get the waiter’s attention (FYI: it was very hard for me to resist pushing it)! Right away I saw pictures of their specialties posted up in the windows and the waiter brought us the menus with similar photos and descriptions of the tasty looking dishes.

For those of you who don’t know, a bibimbap is a Korean dish consisting of rice, vegetables (cooked in sesame oil and garlic) and meat/egg (if desired) served in a scorching hot stone pot (called a dolsot). As I browsed the list of possible choices I was tempted by all of them, but finally settled on the sensible option called équilibre (“balanced” in English) for 12,80 Euros.

Once we had ordered the waiter brought over the accompaniments that consisted of a tray of candied peanuts, lotus root and cucumber and a cold cucumber soup, as well as two bottles of Korean hot sauce (gochujang) and soy sauce (ganjang).

My dish came out piping hot with the mildly seasoned carrots, mushrooms, bean sprouts, cucumber and spinach spread out on top of the rice like flower petals and a fried egg placed carefully in the center. I could hear the rice sizzling underneath and immediately started mixing all my ingredients together, adding a bit of both sauces. The egg, that was only partly cooked, was quickly fried due to the heat of the dish while the bottom layer of rice stuck to the the bowl had a slight crispiness which I enjoyed. With the sauces added I found in to be quite tasty, however I tried my bf’s vitalité (“vitality” in English) bibimbab (14,80 Euros) and would definitely have that next time as the spicy pork added even more flavor to the meal. 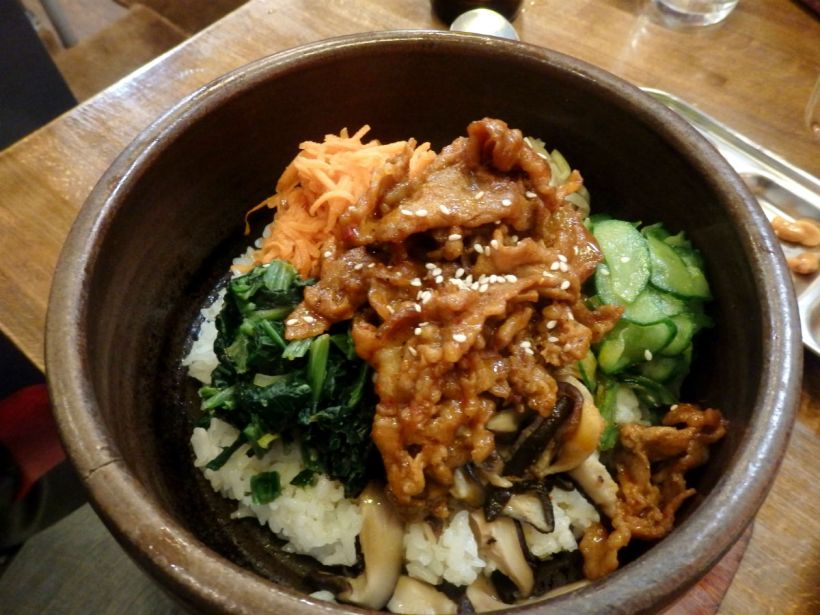 We left feeling full but good about what we had eaten. There are many other dishes on their menu but bibimbaps are delicious and great for anyone looking for a healthy, satisfying and visually appealing meal that won’t interfere with your post-holiday detox plans. Plus, they are open 7 days a week for lunch and dinner!