One thing that’s great about Paris (and other cosmopolitan cities) is that you can find a restaurant for pretty much any type of cuisine you may desire. It’s kind of like going on a tour around the world without having to pay for a plane ticket and allows you to try all sorts of new and exotic dishes. Even if Afghanistan might not currently be on your travel list, that does not have to stop you from trying their amazing cooking. L’Afghani  is a restaurant hidden between Sacré-Coeur and Chateau-Rouge that is easily overlooked, but that I was lucky enough to discover thanks to my friend V who suggested we try it out.

We went with a group of friends and were definitely pleasantly surprised by our experience. Personally I had no idea what to expect, but as soon as we walked in I knew that it was going to be authentic. The owner and server were calm but very friendly and we were shown to a comfy corner booth scattered with cushions. All around us was exploding with Afghan culture: from the lamp shades and tapestries to the traditional instruments and various clothing displayed on the walls, we felt immediately immersed in another world. A beautiful women’s dress caught my eye and for a moment I stopped to admire the vibrant colors and intricate embroidery that made it so gorgeous.  I could almost imagine a beautiful Afghan woman dancing in that very dress and watching the skirt swish as she twirled to the music playing softly throughout the restaurant. 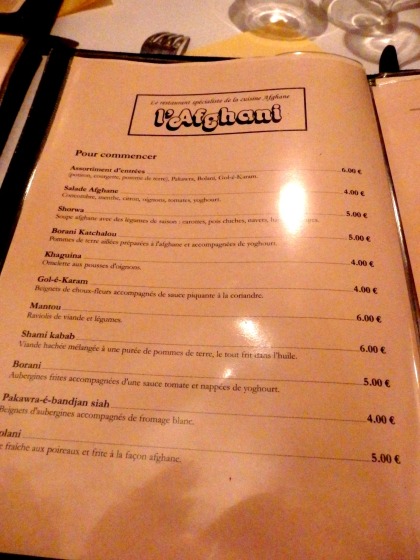 Back at my table we were all hungry and so decided to order some entrées (ranging from 4-6 Euros) to start followed by a main dish each. First came the soft and warm naan bread, then the entrées that were (I’m being totally serious) out of this world! My faves were the Borani (fried eggplant in a rich tomato sauce, drizzled with garlic flavored yogurt) and the Gol-é-karam (lightly fried cauliflower balls with a vinegary tang to them…OMG! Soooo good!). One of my friends tried a yogurt, mint and cucumber drink, which was light and refreshing while I stuck with the cardamom black tea (2.50 Euros). They also have a killer mint tea, FYI!

After devouring those entrées, we were super excited for the next course to arrive. I ordered the Ashak (13 Euros), which reminded me of perogies that were filled with leeks and coriander and covered in a rich ground beef, bean, tomato and lentil sauce and then a light pouring of garlic yogurt. I had never tasted anything like it and was completely happy with my choice. I did however dip my fork into some of the other plates around me, such as the Ghazni Karahi (14 Euros; Afghan style onion and herb meatballs with a pile of rice in the middle, topped with a fried egg), which were very tasty too. What was so nice about these dishes was the mix of spices and flavors that I had never experienced before, but that blended perfectly.

Afterwards some of my friends were up for dessert so they ordered a Halwa zardak (carrot cake squares flavored with rose water, cardamom and coconut milk) and Halwa (kind of like a bowl of soft granola made from flour, almonds, raisins and honey). Both were very sweet and very fragrantly spiced. I was more a fan of the savory courses to be honest, but this in no way means that they weren’t good.

So if you’re in Paris and getting tired of French food then I definitely recommend giving L’Afghani a try. It is reasonably priced, has lots of vegetarian dishes (like the Ashak without the ground beef) and is sure to take your taste buds on a ride to a far away land! Just make sure to reserve a table in advance, because once you’ve been here you can’t wait to go back!